GUEST BLOGGING FOR HEARTS AKILTER:   NOVEMBER 10, 2017 - link to be posted as soon as it's available 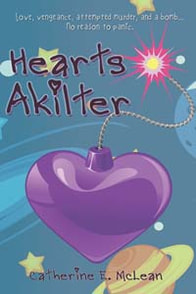 Because I am not a sci-fi fan, I was cautious about reading
this book. Within minutes I was hooked. It is not so 'out there'
that I would get lost in strange names, locations, and
terminology. Catherine E. McLean brought the story to life with
strong, diverse characters, emotions, and mystery. I really liked
the quirkiness of Henry. I look forward to reading more from
this author. - Becky F

All Reviews
Love, vengeance, attempted Murder, and a bomb . . .
No reason to panic.

When a medical robot insists he's having a heart attack, Marlee Evans, a pragmatic maintenance technician, has every reason to panic. There's a bomb inside him. Since Marlee can't risk the bomber discovering she's found the device, her only option is to kidnap Deacon Black, an unflappable bomb expert, and secretly convince him to disarm it.
Things go slightly awry when Deacon sets a trap for someone who is trying to kill him, and inadvertently, captures Marlee instead. Instantly intrigued by her refreshingly forthright and gutsy attitude, he's smitten. Unfortunately for Deacon, Marlee recently hardened her heart and swore off men, especially handsome ones with boy-next-door grins. But as Marlee and Deacon attempt to identify and prevent the bomber from detonating the device, they discover that love may be the most explosive force of all.

EXCERPT:
The bomb. Right. Dismantle the bomb. In this lift? No, that was insane. “Marlene, if the bomb goes off accidentally—”
“It’ll blow the station to kingdom come?”
He nodded.
“Not to worry.”
She said that with such nonchalance that he found himself speechless. He cleared his throat. “Why not? Did you snatch the portable Bomb Disposal Unit, too?”
“Better.”
“What’s better than a BDU?”
“Garbage incinerators.”
“What?” He glanced out into the darkness beyond the lift. Giant machinery stood silhouetted and veiled in shadows. “Where are we?”
“Deck forty-three, Ring D zero three. Relax. Don’t panic. They once accidentally incinerated a torpedo in number four, over yonder.” She pointed to the left. “Nobody heard or felt it explode, and there wasn’t even a drail’s worth of damage done to the incinerator, or anything else.”
“I don’t believe you.”
“It happened three years ago. I was there, a deck above. Never mind.”
Henry manipulated his finger appendage, grabbing and briefly tugging the shirt sleeve of Deacon’s good arm. “Marlee would never lie about anything so important.”
“Does she lie about unimportant things?” He instantly regretted his caustic remark.
“I do not know.” Henry spun sideways, facing Marlee. “Do you lie about unimportant things, Marlee?”
“I have been known to tell a white lie now and then to spare someone’s feelings, but on the whole—” She looked away from Henry.
As her blacker than black eyes met his gaze, Deacon felt pinned to the wall.